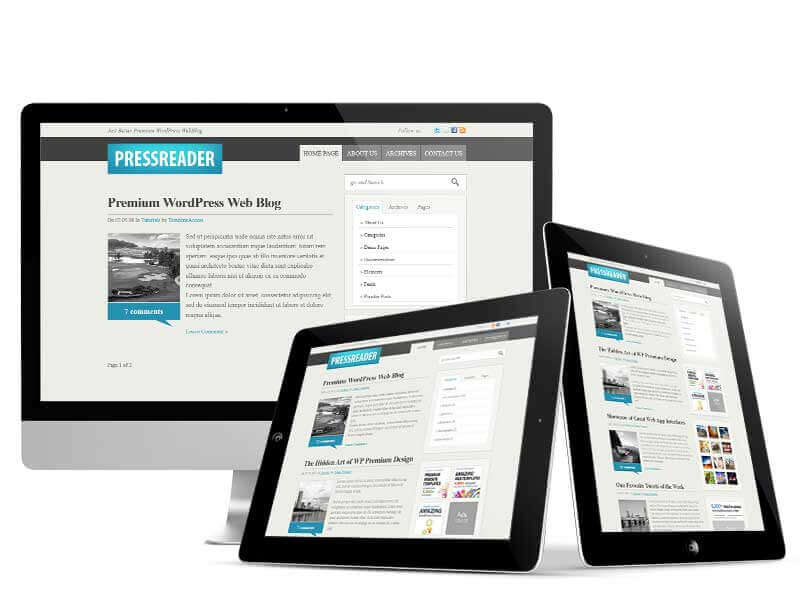 As WordPress professionals, we know why our favourite Content Management System (CMS) works for so many business websites; however, we sometimes find it difficult to communicate this to our clients.

With that in mind, here are some great reasons why WordPress is right for you, your website and your business.

Wordpress Website Designs cater for all types of websites · it allows you to look after your content, add new pages, articles and photographs and remove anything out-of-date.

WordPress began as a personal publishing system way back in 2001, but around 2008 had evolved into a complete Content Management System for websites.

It can be installed on your own server (or that of your website hosting provider). You own everything that's created there and have full, unlimited creative freedom.

WordPress is built using widely used, fully tested programming languages including PHP and SQL, and can accomplish just about any task asked of a website. It is very extendable with a vast and growing library of plugins. Many of these start off as free, which means you can get the site you want faster and at a lower cost than if every component were hand-coded from scratch.

The look and feel of the website can also be pretty much anything you can think of.

WordPress now powers over 20% of the world's websites - that's more than one fifth of the internet, so it's proven, supported and decently here to stay for the foreseeable future.

But we're a professional business

WordPress is used by some of the most widely recognised brands in the world such as; Sony, MTV, BBC, Bloomberg, Microsoft, Walt Disney, Marks and Spencer, Mercedes Benz, etc...

As of 2019, WordPress powers more than 20% of the internet - and of all websites that use a Content Management System, WordPress is the choice of more than 80%.

How does WordPress help with search engines?

WordPress can be a Search Engines favourite website, as it is coded to be search engine friendly “out of the box.” It supports a wide variety of additional plugins that help developers fine-tune every aspect of the site to optimise getting your website found in the major search engines.

Google's latest search algorithm puts fresh, original content in the spotlight - and at the top of search result pages. WordPress makes adding website content very easy for you, all you have to do is to write the words.

The company behind WordPress, Automattic, employs a security team consisting of 25+ experts whose only job is to make sure the WordPress core is safe from attacks such as viruses, trojans, malware etc. They employ some of the best security experts in their field.

Whilst yes as a very popular tool, it can be an obvious target for hackers, with the right steps in place it is as secure as any other website tool.

So, if it's this good why is it Free. What's the Catch?

There isn't any. You have our word. WordPress (and its updates) are open-source, which means you are free to use the software any way you like. You have complete creative and functional freedom. If it can be coded, it's okay to do.

A worldwide team of developers is constantly improving and rigorously testing WordPress. Updates to the core of WordPress are released regularly at no charge whatsoever.

You do however have to pay for a website developer to create a website for you. You can naturally do this yourself for free, but we doubt you will do as good a job as a professional WordPress theme designer and coder. Also, some plugins attract a premium as the engineers who create them are businesses just like you and have spent time and effort creating the plugin, so you do have to pay a small annual fee to have it maintained for you.

If it's built by a bunch of volunteers, how good is it really?

It's Brilliant. The WordPress community comprises some of the best coders, testers and other contributors. WordPress has thousands of talented, dedicated folks behind it. Updates, fixes and improvements come at a steady pace.

WordPress meets all guidelines of the World Wide Web Consortium, an international community that aims to develop across-the-Web standards for coding.

WordPress also follows best practices as laid out by Google, Bing and Yahoo. It works in all modern website browsers (Firefox, Chrome, Safari, Edge, Opera and other browsers like particularly Internet Explorer).

All developers - regardless of their approaches to designing and developing your site - must be proficient in HTML and CSS. Most also know some JavaScript. WordPress developers, however, need to know the intricacies of PHP and have at least a decent familiarity with SQL, and they must know the architecture and coding specific to WordPress as well.

So, long story short, the skillsets of WordPress and traditional developers complement and overlap each other, and WordPress developers are no less professional than any others. The difference is that the latter don't start every project with a blank screen. Instead, they begin with a tested, proven, widely used and well-coded framework that's already done a lot of the standard stuff that doesn't need reinventing. So, you don't have to pay to reinvent the wheel. Sounds a lot smarter, doesn't it?

Take a look at some of our recent Wordpress website designs

Here are just a few examples of some of our most recent Wordpress website design work.
View our entire portfolio, or select one of the websites below for more information about that particular Wordpress website.